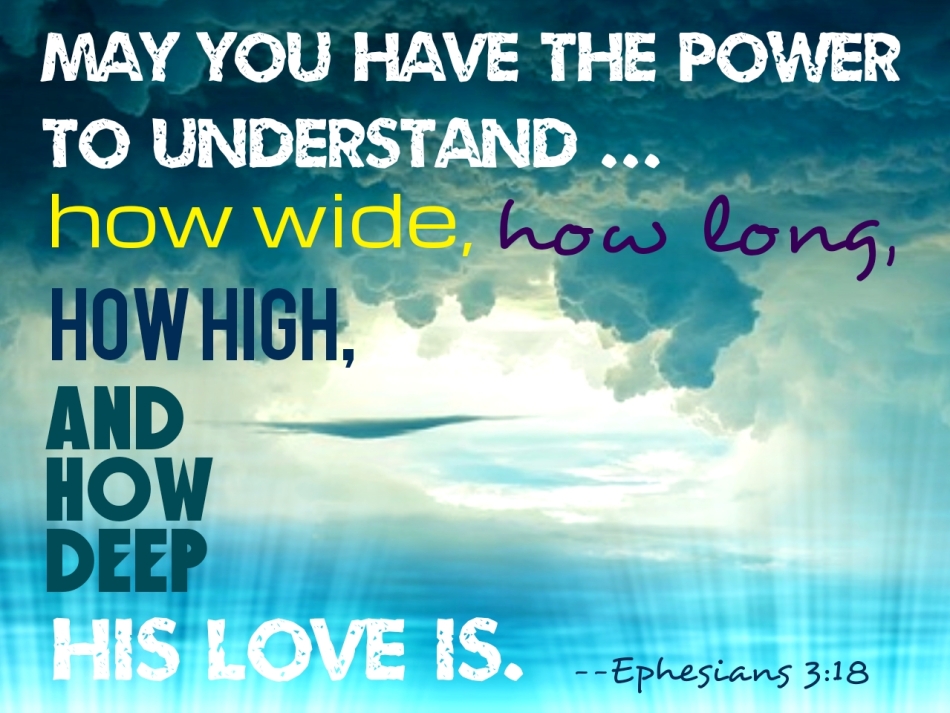 “And may you have the power to understand, as all God’s people should, how wide, how long, how high, and how deep his love is.”–Ephesians 3:18 (NLT)

How wide.
How long.
How high.
How deep.

It’s the love of God in four dimensions.

Another Bible translation uses language that is more mathematical:  width, length, depth and height. Dimensions are “measurable extents” according to Google’s dictionary.

I’m not a physicist or mathematician, but I know that four dimensions aren’t easily expressed with a pencil and a piece of paper.

If asked to represent the first dimension, I would draw a line. For the second, I might choose a square and for the third a cube. But what about the fourth dimension? 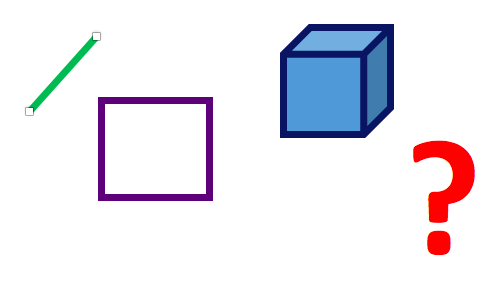 We live in a 3D world, and anything beyond that is hard to visualize.

Maybe plotting points would help. For the first dimension, we can move left or right on a line and designate any point as x. Add another axis and we can move left or right AND up or down to plot (x,y). In 3D, we can still move left, right, up, and down, but we don’t stop there. Now we can also move forward or backward, adding depth to shapes and a third coordinate when we plot the point (x, y, z). 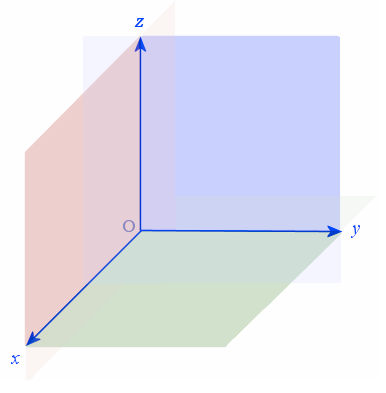 The natural progression of this thinking would be to move to the fourth dimension, adding another axis and another coordinate (x, y, z, ?).

But I can’t fathom that, let alone picture or draw it. I’d venture to say that most people hit a mind block at this point.

Still, Einstein envisioned a fourth dimension and called it time. This is like having an appointment at the corner of Broadway and Main St., on the 4th floor, at 9am. Four pieces of information, or coordinates, are needed to fully describe it (x, y, z, t).

Ephesians 3:18 says that the love of God is the same way. Our minds can easily think and visualize in 3D, because it’s the pattern of the world we see every day. But three dimensions aren’t sufficient to describe God’s love. It’s beyond comprehension, yet the verse itself is Paul’s prayer that we would “have the power to understand” or in the NKJV, “may be able to comprehend” the dimensions of God’s love.

Dr. Math from mathforum.org says that the fourth dimension can represent things other than time, say temperature or pressure. So, I could describe the length, width and height of an object. That’s easy to picture, but how do you “see” the temperature of that same object? Or the amount of pressure it exerts?

The same struggle arises when we try to understand the four dimensional love of God from a 3D perspective. We’re accustomed to believing what we can see and touch–things that can be easily quantified.

We’ve been taught that God loves us, and we believe it. But throw in an extended length of time between our prayer request and the answer, and we start to doubt.

We read that God is love and that His love never fails, but when life’s temperature is turned up we get frantic.

We know that the perfect love of God casts out fear, but as the pressure of circumstances increases, we become afraid.

All of us do this at times, and it’s understandable really, but it’s not God’s intention for how we experience His love. That’s why Paul prayed that we would grasp the reality of God’s kind of love.

To truly know God’s love, we have to look beyond what we’ve always seen to what we can’t see yet but know is there. That requires eyes of faith.

Faith to believe that the God’s love stretches longer than the years we’ve waited for answers and that it doesn’t buckle under pressure or deteriorate as temperatures rise.

Because the love of God is high enough to bridge the gap between heaven and earth.

“Your love, Lord , reaches to the heavens, your faithfulness to the skies.”–Psalm 36:5

It’s longer than the furthest reach of time.

The love of God is as wide as the arms of Jesus stretched out on the cross–wide enough to embrace us all.

And His love is deep.

“There is no pit so deep, that God’s love is not deeper still.”–Corrie ten Boom (This from a woman who endured the Holocaust.)

So when Romans 8:37-39 says that “overwhelming victory is ours through Christ, who loved us” and that “nothing can ever separate us from God’s love,” it really means NOTHING.

God’s love extends in all directions with no boundary to curb it. It’s unbroken by time, unconditional by nature, and impenetrable to any force that would try to break its power.

That kind of love may be hard to grasp from a 3D vantage point, but it’s real and it’s the reason we can trust our loving God through every situation.