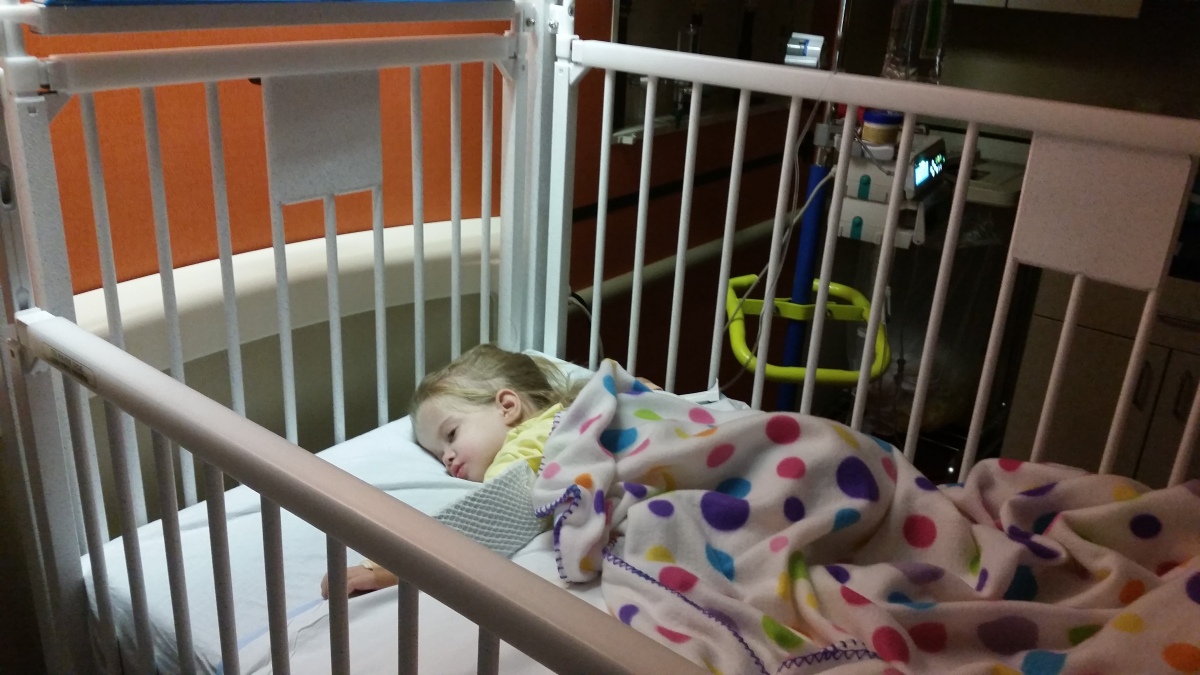 I am sitting in a hospital room with Olivia for the third time since she was born. She caught a virus–again–and couldn’t keep enough fluid in her little 20 pound body to avoid getting dehydrated. So, they inserted an IV, admitted her, and here we are.

As I listen to the constant cries of the patient next door, I am thankful that Olivia is sleeping peacefully and that for now, the needle-sticking, poking and prodding are over. I am also glad that this situation is not a life-threatening one, and that the doctor says we may get to go home tomorrow.

Next to all of my grateful thoughts, the less noble ones seem out of place. Still, they are there–fighting for a place in my mind and a grip on my life:

“Why do we have to be here when we should be enjoying Christmas time with family?”

“This is the way its going to be. Every time she catches a bug it will mean another hospital stay.”

Worst are the memories of the time we spent in this same hospital two months ago, when Robert’s dad passed away. I remember sitting in a room in another wing, hurting for my husband as we watched his father die, all the while fighting thoughts sent straight from hell that said, “This will be Olivia someday, and you’ll be watching her die.”

I’ve learned that having faith doesn’t make the fight disappear, it just means that I am battling from a position of victory and am guaranteed peace while the punches are being thrown.

If Jesus can win the battle of my mind in one hospital room, I know He can do it here too.

The day before we brought Olivia to the emergency room, I downloaded a book called, “Piercing the Darkness,” by Frank Peretti. I had read “This Present Darkness” but didn’t realize there was a sequel until my aunt and uncle told me about it. The books are fictional but draw from biblical truth. The stories create a picture of the spiritual warfare–the literal fight between God and Satan, angels and demons–that goes on behind the scenes of our lives.

There was nothing new to me in the books, nothing I didn’t already believe in, but reading it from the vantage point of a hospital room made me realize the very real role that human beings play in the outcome of the struggles that life brings.

If the burden of fighting was on my shoulders, I would have lost long ago. Jesus won enduring victory when He submitted to the cross and then rose from the dead. But God has created us in His own image. Like Him, we are able to feel the pain of parting with someone we love, and like Him we experience the joy of being reunited. He has given us the ability and freedom to choose for ourselves which way we will go.

As the human race, we chose disobedience and caused the onslaught of evil and pain that continues to rack the earth today. Jesus provided the only solution, and only by embracing that solution can we experience the triumph that He purchased.

I’ve never liked sitting on the sidelines, and so I appreciate the fact that my God-given role is not to watch the war from afar but to engage in hand-to-hand combat:

“A final word:  Be strong in the Lord and in His mighty power. Put on all of God’s armor so that you will be able to stand firm against all strategies of the devil. For we are not fighting against flesh-and-blood enemies, but against evil rulers and authorities of the unseen world, against mighty powers in this dark world, and against evil spirits in the heavenly places. Therefore, put on every piece of God’s armor so you will be able to resist the enemy in the time of evil. Then after the battle you will be standing firm.”–Ephesians 6:10-13 (NLT)

Not only have I been called to fight, I have nothing to fear. It is easy to fight fearless when your General has never lost. In fact, He has already won, and there is no end to the resources at the disposal of His soldiers. It is as if we have been sent on a conquest that has been decided; the path to triumph is paved, and we’ve only to obey.

Knowing where my help comes from, I choose to fight. Like the characters in the book I read this week, my battle doesn’t look like clashing swords or flying bullets. Instead, it looks like obedience. My most valuable weapon is prayer, and I will conquer in this way:

“And they have defeated him by the blood of the Lamb and by their testimony. And they did not love their lives so much that they were afraid to die.”–Revelation 12:11 (NLT)

That verse could easily read “they did not love their lives so much that they were afraid for their loved ones to die.” I am not afraid when I remember that if Olivia were to be absent from my arms she would be present with Jesus. Still, I will fight for her life and for His Kingdom, because of the Word that fills my heart with faith:

That verse is one of many that God has spoken to my heart over the months since Olivia’s diagnosis. In so many ways, He has reassured me again and again that He has a plan and will bring it to completion.

Even though I realize that many of the things I have to say below will not be easily received by some people, Christian or not, I am choosing to share them here because they are part of our testimony. When viewed in light of the goodness of God, the strength of the work of the cross, and the power of the name of Jesus, I can’t help but be filled with faith by the countless encouraging words and pictures of hope that God has delivered to me through others, through His Word, or straight to my heart. This is part of the “reason for the hope that I have” (I Peter 3:15): 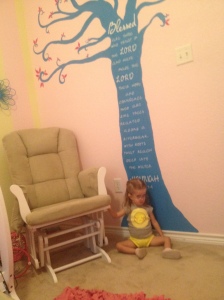 Dreaming, a friend of mine saw a row of houses all alike–each with a window box full of flowers. There were varying numbers of flowers at each of the different houses, and ours had only one. While all of the other flowers were strong and healthy, ours was withered and drooping. People came knocking at our door to offer condolences. Some wanted to press our flower or put it in a glass box. We were becoming frustrated at the well-meaning visitors when the street emptied–all except for one woman carrying two pots of flowers on a pole over her shoulders. She came to our door, saw our flower and said, “Oh, that’s easy! I can fix that!” Then the pollen from her flowers blew onto ours and caused it to bloom tall and beautiful.

“He staggered not at the promise of God through unbelief; but was strong in faith, giving glory to God; And being fully persuaded that, what he had promised, he was also able to perform.”–Romans 4:20-21 (KJV)

This verse has double the meaning for me, because it is about Abraham–someone I have related to in learning to surrender my only child to God while still holding on to His promise. (Read more about this here.)

The telling of these moments when God has steadied my faith could go on, but for now I only want to say that God has proven to me over and over again that He is big enough, and good enough–that He CARES enough that I can trust Him with Olivia’s future.

Though I pray this post encourages someone to stand firm in believing for victory in their own battle, I am writing it for myself. It is my obedience, the word of my testimony, and my prayer of faith. Even as I write this, I can feel the courage of a warrior rising in my heart–something only God can give.

Half of me is laughing, because before we ever suspected that Olivia might be sick, I wrote and recorded something called “Warrior’s Song.” Robert played it the other day and chuckled because it has a line in it that says, “burn the white flag of surrender.” He thought that was funny, considering the title of this blog.

I thought about the irony–both in the fact that I didn’t realize the meaning of the song while I was writing it, and in using that phrase on a site called Free to Surrender.

I decided that while surrender is the key to everything that God is doing in my life right now, it means nothing if I am surrendering to the wrong side. So I will surrender to the only One who is worthy of it:  Jesus, who gave His life to give me everything. And, I will stand and fight in Jesus’ name and in His strength against the enemy of my soul–the one who would take it all if I let him.

Thank You for allowing me to be Olivia’s mother. I put her in Your hands–only You can save her. I believe that You are Healer and that You are good. Your Word says that You are both able and willing to heal her, and I place my faith in Your Word, which doesn’t return empty. I will not stagger in unbelief. I trust that You are able to perform Your promise. Olivia’s future is Yours, and I will trust You with it no matter what happens. I resist Satan’s plan for Olivia and rebuke the powers of darkness that would destroy her. Though the thief comes to kill, Jesus brings abundant life, and we receive it in His name. Thank You for Your awesome plan for Olivia’s life and for the assurance that You will complete what you have started in her.

In the name of Jesus,
Amen

Thanks to Robert Chapman, Chris Gilliam, Crystal Mott, Brandon Pelton and Katy Skogberg for playing on the recording of this song.