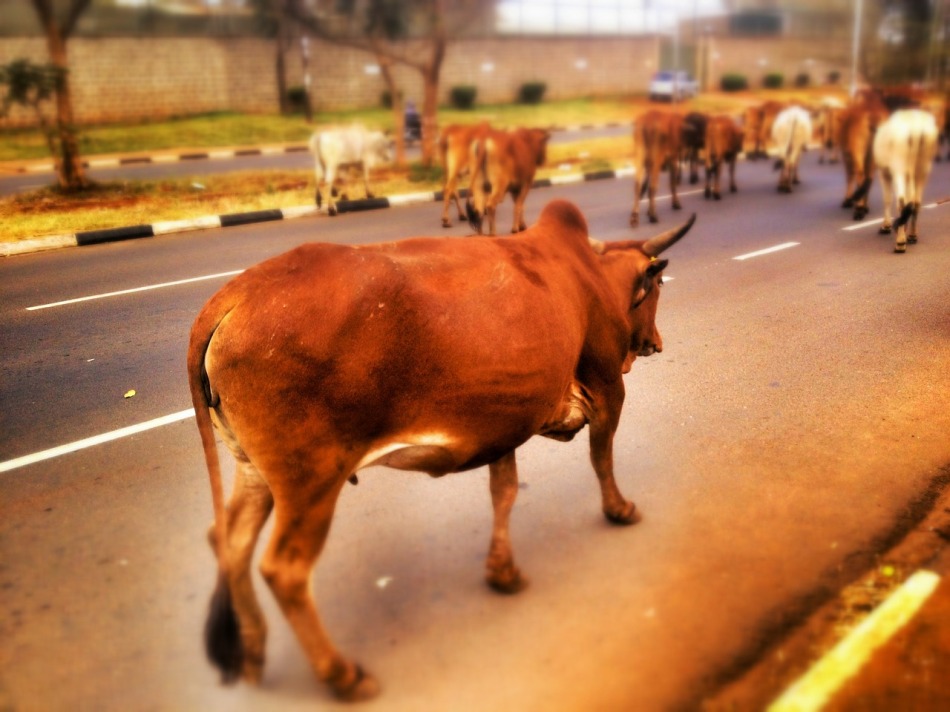 We were driving home late last night, and mom nearly plowed through a herd of cows that had escaped their fence and were holding a cattle convention in the middle of the highway.

It reminded me of a story I’d heard my dad tell about the time he killed 7 black cows on a country road in the wee hours of the morning. Apparently it was too dark to see them until one of the beasts came crashing through the windshield of his light blue Buick Regal. The following Christmas, my uncle took some black cattle from his sons’ toy farm set and glued them to a blue Hot Wheels car as a gag gift.

Thankfully, OUR loitering livestock were headed up by a heifer of the white variety–allowing mom to swerve just as her headlights illuminated the ghostly, four-legged figure. She then performed a few evasive driving techniques that I’d never have guessed were part of her repertoire and slammed on the brakes. We came to a stop just inches from the nose of another cow.

I called 911 in hopes of averting a bovine disaster, and we got home no worse for wear and with a story to tell. I was impressed with mom’s steering prowess (how’s that for a double entendre? ..), and I cannot emphasize how glad I am to have been sitting in the passenger’s seat. I’m sure the cows are grateful too. If I’d been behind the wheel, I would’ve barreled through those poor animals like a runaway train headed for the zoo. (See Jesus, take Every Wheel for more on my inadequacies as a driver.)

As relief over safe cows flooded my mind last night, a fresh awareness of the trust and security that I’ve found in Jesus filled my heart. I don’t mean salvation; I’ve long known what it is to be rescued from the kingdom of darkness and transferred into the Kingdom of light (Colossians 1:13). But when God saves us, He doesn’t remove the steering wheel from our lives. We still have a will. We still get to choose. Daily, we decide to trust Him with all or only part of our lives.

Our family is in transition, and I don’t currently have a job. Or a house. What I do have is a house on the market that needs to sell, an adoption process that is halted until we find a home, and a husband who is entering the busiest season of a brand-new field of work.

I keep thinking that I need to do something about all of that, but God reminded me of the story of Moses from Exodus 2 and whispered, “Will you go in the basket?”

You know the story … Pharaoh sees the Hebrews growing in strength and number and orders every Hebrew boy to be thrown into the river and drowned. Moses’ mother puts him in a basket and floats him down the Nile–not knowing the outcome but hoping for a better future in the water than could be found on the shore. Baby Moses is found and raised
by an Egyptian princess. He eventually helps to free the Hebrews from Egyptian slavery.

When I apply the story to my own life, my first thought is whether I–like Moses’ mother–trust God enough to put my child in a basket and let go. This question has been walked out over the last three years of my life, with every diagnosis, symptom, and decision that concerns my sweet little 4-year-old. It’s a question that gets asked again and again, and the answer is a resounding, “Yes!” I choose to put her in the basket, because that’s where the hope is. That’s where my God is.

But this time God didn’t ask about Olivia, He asked about me. My Father nudged my heart and asked if I trust Him enough to be placed in a basket and launched into the water.

Will I allow myself to be sent into the river with all of its currents and bends and uncertainty?

I think the answer is yes. It’s taken me way too long to arrive here, but I’ve finally come to the place where I’d rather have God steer for me–the car, the basket, and my life. Like a father arranging a marriage or making a place for his kids in the family business–I want God to choose, and I realize that He doesn’t need my help. He just needs my heart.

I think that as we follow Jesus, growing in maturity so often means learning to become like a child again.

As a little girl, I entrusted my whole future to God without a second thought, because I saw Him as full of wonder and adventure.

In my teens, I viewed present circumstances as something to move beyond and began to hold stock in my own ability–willing myself up ladders of my own choosing.

Throughout my twenties, I’ve encountered circumstances and questions that couldn’t be answered by any amount of talent, intellect, or willpower. I’ve been humbled. Oh, so very humbled.

As I approach 30 years old, I think I’d like to be a child again. Because a future full of wonder and undiscovered adventure sounds better than one I dream up and check off as I haul myself up each rung of a ladder. Because there is so much more hope in the river than on the shore. Because the cows in front of me are too big and too many, and I know down deep inside that I don’t have what it takes to make it to the other side unscathed.

Even saying that seems wrong–so contrary to the “believe you have what it takes” mantra that we’ve all become so accustomed to. Still, I’d rather believe that God in me has what it takes.

For every part of me that would kneel to admit that I’m actually not enough, the One who is and will always be enough rises to fill the void.

“Each time he said, “My grace is all you need. My power works best in weakness.” So now I am glad to boast about my weaknesses, so that the power of Christ can work through me.”–II Corinthians 12:9

” I tell you the truth, anyone who doesn’t receive the Kingdom of God like a child will never enter it.”–Mark 10:15

6 comments on “The Cows in Front of Me” 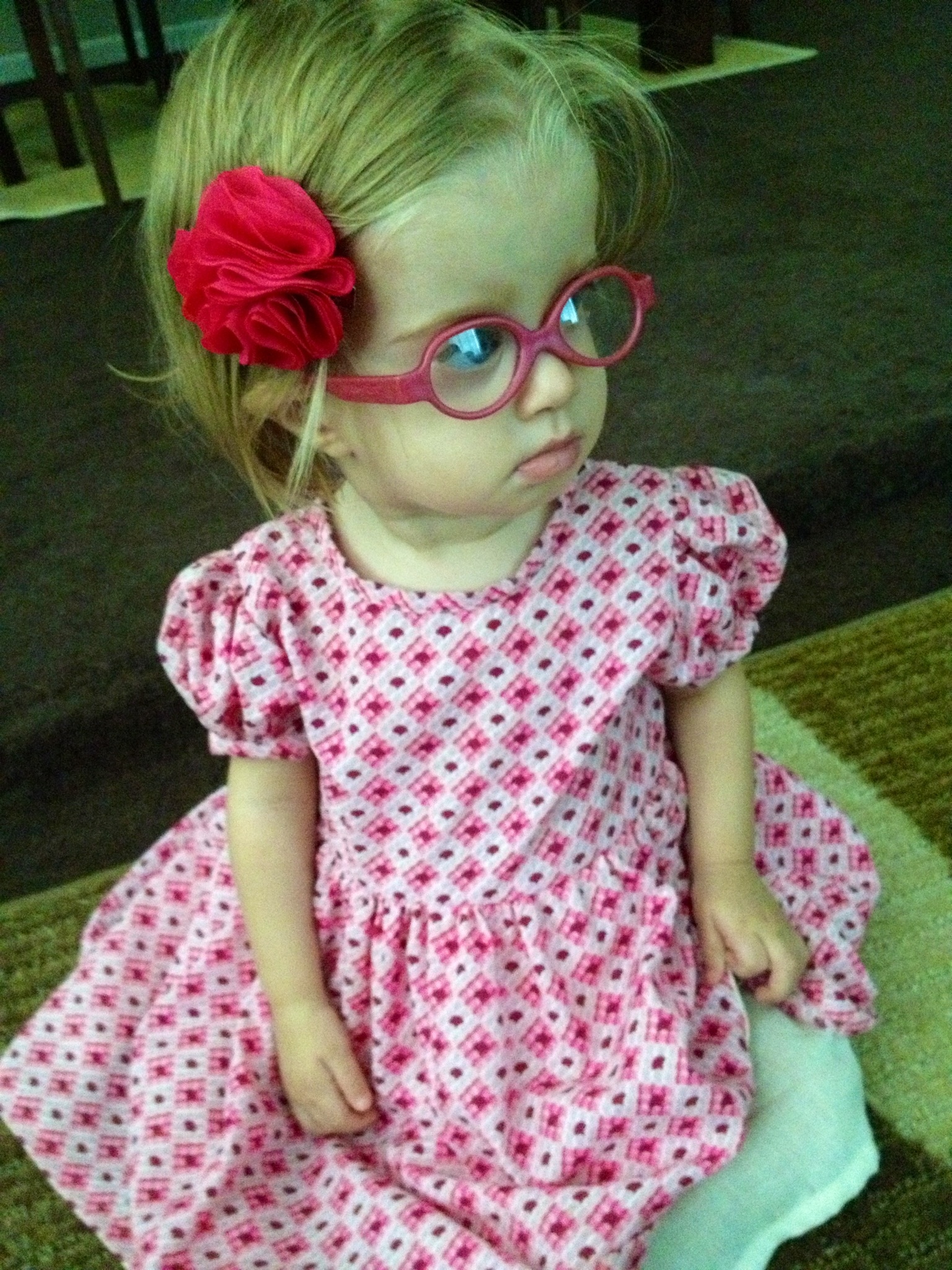